It is day two of the new year and the Lord is already teaching me valuable lessons.

The kids and I made a surprise trip to Virginia to visit my daughter and her family. I am so thankful for her husband who helped me work out the details. The visit was wonderful but far too short.

And it is still continuing.

The sunrise was glorious as we pulled onto the interstate – 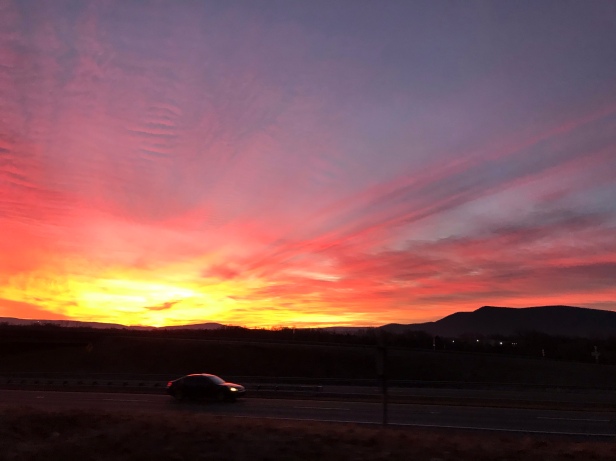 Then three hours after our drive began I found this jewel in the bathroom of a Love’s gas station.

I didn’t understand the meaning behind it though until tonight – after spending HOURS meandering through country roads in the dark trying to get to my destination.

The meandering and fear I experienced during those hours could have easily been avoided though . . .

The plan was to take a longer route home but the longer route would have allowed me and the kids to see my great aunt in Anderson SC. All was going well until one of my kiddos got sick. After multiple stops and making little traction we decided to cancel the additional stop to keep our germs to ourselves but because of all the delays we would be facing Atlanta traffic during rush hour in the rain – so instead of driving through Atlanta I decided to drive the longer route around Atlanta.

In my planning I didn’t consider that the route would include country back roads with no lighting – in the dark.

I praised the Lord it wasn’t raining like it was supposed to be but I was scared. Traffic was scarce. I was alone on roads I had never been on with no lights poles to guide the way.

It. Was. Dark. And the roads were narrow.

Then I said, “Lord, it would have been better to deal with my fear and driven THROUGH Atlanta and faced my fears than to meander AROUND and be in isolation and afraid and not know where I am going.”

Isn’t that the lesson He wants us to learn in life y’all?

Face your fear and keep going.

I am with you.

And then He reminded me of the rock –

“Ugh. I should have just faced the Atlanta traffic because at least that way if something happened I wouldn’t be alone in this journey”

Fear has had a stronghold on me for so so long. It affects me in many areas of my life. Today, it caused me to experience a panic I’ve never experienced and cost me not only hours of time but additional money on gas and a hotel room.

Maybe the fear you are facing today doesn’t seem to cost you anything – after all I couldn’t imagine the panic I could have experienced by simply going around Atlanta- but whatever that fear is you have that is keeping you from moving forward is costing you something – maybe it isn’t time, or money – but maybe it’s your peace? Or maybe it’s costing you your family, or maybe it is causing you division in relationships – whatever it is that fear is costing you, I promise you – it’s not worth it.

I don’t know what else the Lord is going to reveal to me during 2020 or what He has in store for you but I pray you have the courage to go through and face your fears versus the alternative of avoidance.

As I lie down tonight my heart is thankful for many things . . . for His protective arm, a place of rest, and that He loves me so much He continues to teach me.

Psalm 23:4, Yea, though I walk through the valley of the shadow of death, I will fear no evil: for thou art with me; thy rod and thy staff they comfort me.