We have worked hard to clean out a flower bed in our front yard. When we first moved in it was overgrown with azaleas so big you couldn’t see over them or around them. A Jasmine vine had surrounded the entire support beam leaving only a few feet to squeeze between the vine and the brick to get to the door. The holly bushes were as tall as the windows and it lacked the welcoming feel I desired when I would pull up in the drive.

The flowers are still blooming and we had added bits and pieces of this and that. God has blessed us with a lot of clippings from friends, clearance specials at Walmart, and hand me downs from others. The one thing Chris missed most when we moved in was a pond so I surprised him with a trickle down pond a few weeks after moving in . . . something small for the area but also filled empty space. Of course, he was the one having to dig the holes so I am not sure how much of a gift it was, but still, I think he enjoys having it.

These ferns are from our wedding. They have survived thirteen years and are thriving in their new location. In fact, pretty soon I will have to transfer some to another pot. 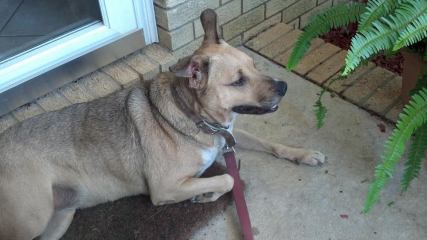 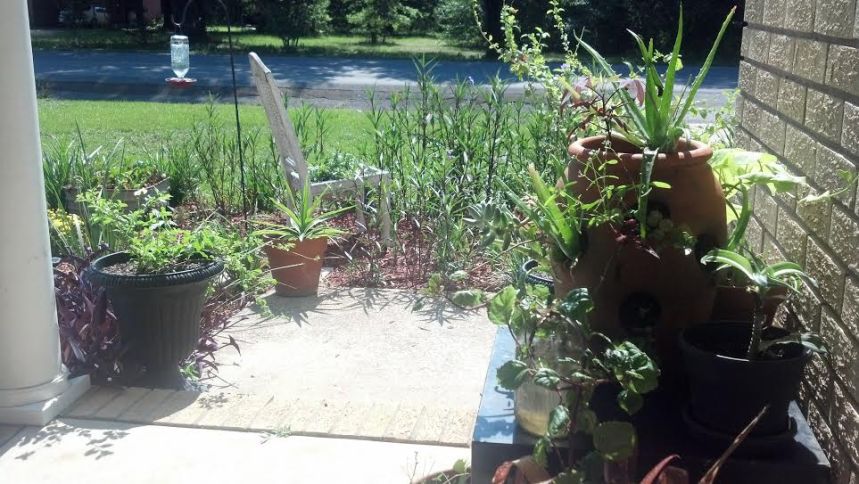 In the fall of last year the kids and I found a water fountain that was marked down considerably . . . like $70 to $20. When we got it I thought it was made to sit on the side of a pond feature and trickle into a pond (tells you what I know), but instead it is a stand alone feature. It is so perfect for the porch though . . . it is loud and so peaceful. You can hear the trickle as if it were a stream flowing down a mountain’s edge and it was that serenity that my soul yearned for yesterday. Christopher was at therapy and it was just me and Kaitlyn so I thought I would take some me time . . .

After spending a few minutes enjoying the scenery and listening to the birds singing, I sat down on my front porch to read from the Scriptures and spend time with the Lord. Something I have not been doing regularly . . . or maybe intimately is a better word. Oh I spend time worshiping and praising Him, and I talk to Him a lot . . . and I listen and am pretty sensitive to do what He tells me or is prompting me to do . . . and I read online devotionals and encouraging words . . . but . . .  I haven’t been setting a time just for me . . . and Him . . . and that’s where the rubber meets the road.

I had just opened my journal when the Gulf Power truck backed in to my drive way. I gulped, and then panicked. The power bill. I was still in my pajamas and hated to be seen but had no choice. The week prior I had to make a stop payment on the check that was to pay the bill. The same week I had called Gulf Power three times to let them know what was happening. This past Saturday I received a notification that the payment was returned and call the office. I didn’t do that. I assumed since I had already called the office three times that they understood I would be in next Friday to pay that bill. I guess it doesn’t work that way because even with calling them again while the workers were here to disconnect our service, they said since I didn’t call back after that notice no arrangements were made.

All the while my poor Kaitlyn is following me around confused and wanting to know when she could get back on wifi. And I lost it. Not to her, but with myself. Mad I can’t remember things. Mad I hurt from sun up to sun down. Mad I am not the go have fun person I used to be. Just mad at everything.

From “my chair” in the living room you can see the front porch. As I plopped down I looked and saw it. My Bible, devotionals, and journal . . . right where I left them . . . in my seat.

I knew then how definite of an attack this was from satan.

Instead of taking the time to seize the moment and gain perspective spending time with he Lord, I made frantic texts to my husband from a cell phone that had no bars because I didn’t charge it. I had no phone numbers because everything is online . . . and I panicked. I completely lost focus.

I remained loss the rest of the day. Confused and frustrated because I chose not to spend that time with Him. And then this morning I read these words from a friend who is facing many changes in her life, “I humbly challenge whoever will read this post to not believe me but read the Word of God for yourself…it is the power of God that brings transformation!” and I was reminded of Lamentations 3:23 that every day is a new day which translates to me that every day is a new day. A fresh start. The fact is, that as long as I have breath, I have hope. So yesterday I blew it, and I am sure I will blow it again, but because of God’s grace and mercy I have a second chance . . . and this time I won’t miss it.

Father, thank you for those new days, new moments and over all newness you to bring to life day by day. Forgive me for being frantic and snappy, for being selfish and fearful. As I typed those words I envision Peter sinking because he took his eyes off of you, Lord. Forgive me for taking my eyes off of you. I’m tired of gurgling and taking on water. Send me a freshness, a new wave, a hunger and thirst for our time and oh God strengthen me and empower me . . .give me wisdom and insight and knowledge to recognize an attack and oh Lord make my feet like concrete that I would stand firm against satan and not back down. I can’t do this thing called life without you. I am physically, mentally, and spiritually week. Fight these battles. Give me clarity to do what you would have me to do. Thank you for another day. Amen.