Skip to content
Date: 23 Mar 2013Author: Stacey Paden 0 Comments
I have had several people ask me about pictures of my pallet chicken coop.  I have intentionally not posted them because . . . . . well, as the pictures will show, it leaves little to be desired; BUT, it serves the purpose!

The roof is not complete and I continue to pray nightly for the safety of those hens! A friend from our church has some metal sheeting that we can have; we just haven’t been able to arrange getting it with Chris’ school/work schedule; HOWEVER, with spring break this week, I am hoping to get that taken care of!  There is a huge gap all the way around for predators to easily enter in, so when that is finished,  I will update with another picture.

The coop cost less than $30 to build and that was for screws.  I had to use screws with the drill because when I tried hammering, it killing my shoulder, or it would have cost less.  My mother purchased the mesh, so if we had to carry that cost, the total would have been $50.

I DID NOT try and level this thing.  I eye-balled it.  I did that because with pallets and not have any electrical saws, I would have stressed myself out trying to make it “perfect,” so I set the standards from the beginning that this was to keep the hens warm and dry from bad weather.  Nothing else mattered.  OK.  OK.

I originally wanted to have an enclosed run as well, but changed that to keep cost down.  They free range throughout the day and return to their spot nightly. 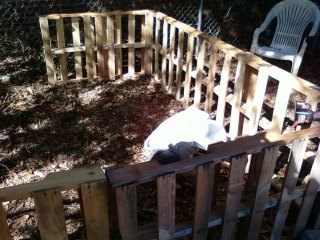 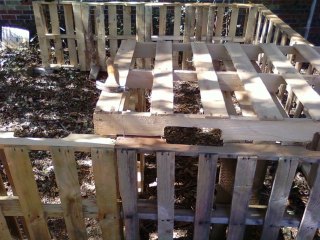 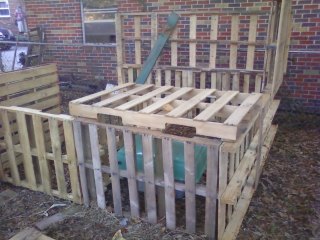 Inside.  It’s funny how God provided.  The beam in the middle standing up, was buried on the side of the yard.  We needed a central support for a roof.  There ya go! 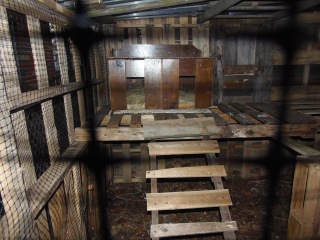 The nesting box, is an old toy box of mine from 1976!  Removed the front two panels and turned them vertical, giving them an entry.  The hens slept in it until they learned to roost!  The ladder was made out of pallets as well.

This is the back of the coop.

This is the window in the back of the coop.  It is not screened it yet, but will be for summer time breeze.

All the research I did said most chicken coops (especially in the south with the heat) are not ventilated enough.  One site said, “take whatever you think is enough, and double it and even that might not be enough.”  Soooo, I left the entire top left of the coop open (facing my neighbor’s garage . . . hehehehehe) and put up mesh.  I was storing the feed inside, but quickly moved everything out after cleaning poop off the lids!  Ick! lol

This is the side view.  I use a pallet to keep the food bins off the ground to keep moisture under control and another pallet I use to contain the tools I use for the hay and cleaning.  In other places, instead of filling in the spaces that didn’t line up plum or where pallets were split or broken, I left them open and put mesh up.  As mild as our winters are, I was more concerned about them having fresh air than I was being warm.
So, there ya have it.  Not finished, but getting there and serving the purpose!  This coop can easily hold 12 hens, so that is a good thing 😉