I search Craigs List regularly for freebee items for things around here . . . . and for chickens!

One day, after not searching for chickens lately, something told me to search.  So I did.

And there they were!

Now, once I got them home, thanks to my friend Jenny and her son Branden, I realized their coop wasn’t all that . . . . . but that’s OK.  As the pictures will show, I have learned to be quite creative on a skimpy budget AND my mom chipped in and bought some wire along with some boards for Chris to build some protection for them.

I am not sure which theme song is more appropriate, The Beverly Hillbillies or Sanford & Son’s . . . . so you can take your pick. 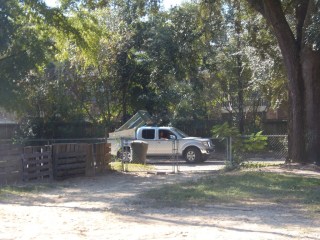 As soon as I saw this, I laughed out loud! 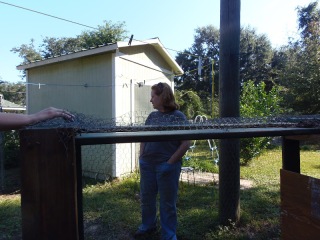 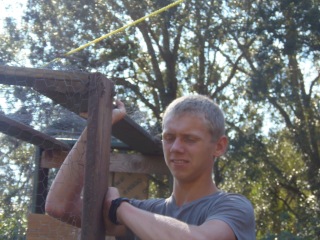 (Christopher took this one of Branden working hard.) 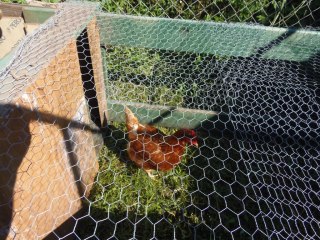 Everything I’ve read and everyone I’ve talked to said not to expect any eggs for several days; even up to a few weeks.  Well, we had one within a few hours!

Chris is checking out the new addition . . . 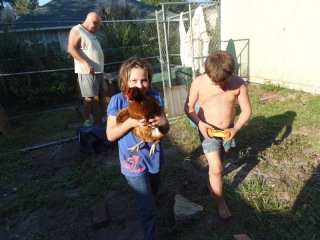 She hasn’t met an animal that doesn’t adore her. 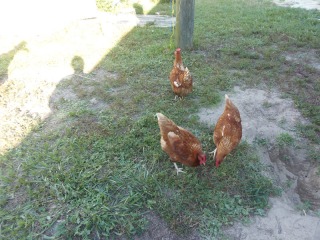 Now.  Let me explain this. lol.  We decided to put the chickens on the side yard that is NEVER used and was really bad over grown.  The problem, we put the senior dog, Shelby, in the back yard and we needed a way to keep her away from the chickens.  We had pallets left over, so my husband used them to make a fence with a gate to protect the chickens. 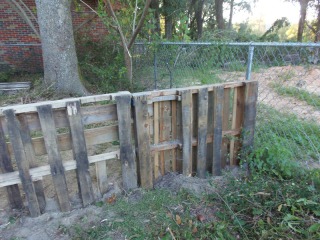 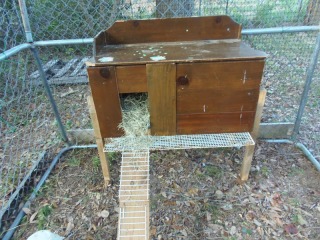 We decided the little bitty green run the the chickens were in before was too small for them.  They needed a nesting box.  After mulling it over for a bit, I came up with the idea of using my old toy box!  This is it!  It still has the sticker on the back from 1979 when dad was transferred and the military moved us! 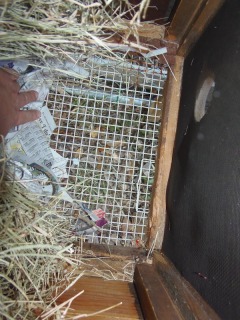 Punched out the bottom of the toy box and put a wire grate as the bottom for air circulation and for ease in clean up.  Then layered shredded paper and feeding straw in the bottom. 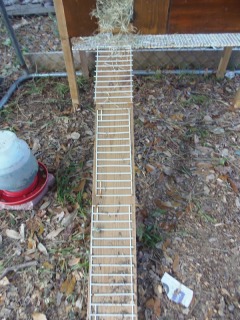 Chris added four legs to get it off the ground.  Used a board and more wire for the steps 🙂  and we had a ramp!

Drilled some holes in the side for more air flow.

Removed the front left panels and switched them around to make a door opening. 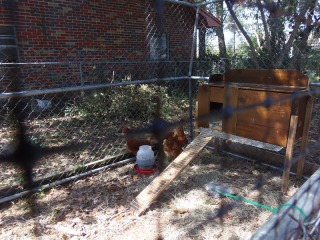 And we have a nesting box!  The lady that had the chickens had them sleeping and laying their eggs in the same area.  I hadn’t figured out what to do or not to do, so this is what they had for the first week.  We kept them enclosed in a fencing area and let them out for an hour or so a day. 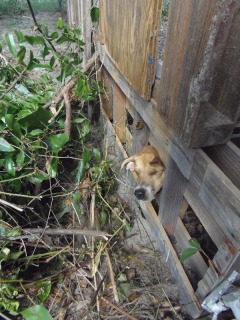 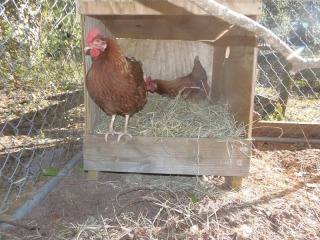 Then today, mom brought some plywood by for Chris to make a nesting box since really and truly they are supposed to be nesting and sleeping in two different boxes.  They loved it!  I added a bar to the toy box for them to be able to roost in.  When we checked on them tonight, they weren’t liking that too much.  They have been going without a roost since they were 1 day old, so I am sure they are confused.  Tomorrow I will remove it and they can keep being confused chickens. They will fit right in over here!

The drill died so Chris only got one hole in the side.  More to come; but for now, they have another nesting box that is a few inches off the ground and a place to go if it rains.
So that is it.  Nothing fancy.  But it works.
The chickens have been giving us three eggs a day since they arrived.
I think they are happy, don’t you?!
🙂