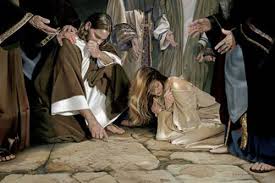 2 At dawn he appeared again in the temple courts, where all the people gathered around him, and he sat down to teach them. 3 The teachers of the law and the Pharisees brought in a woman caught in adultery. They made her stand before the group 4 and said to Jesus, “Teacher, this woman was caught in the act of adultery. 5 In the Law Moses commanded us to stone such women. Now what do you say?” 6 They were using this question as a trap, in order to have a basis for accusing him.
But Jesus bent down and started to write on the ground with his finger. 7 When they kept on questioning him, he straightened up and said to them, “Let any one of you who is without sin be the first to throw a stone at her.” 8 Again he stooped down and wrote on the ground.
9 At this, those who heard began to go away one at a time, the older ones first, until only Jesus was left, with the woman still standing there. 10 Jesus straightened up and asked her, “Woman, where are they? Has no one condemned you?”
11 “No one, sir,” she said.  “Then neither do I condemn you,” Jesus declared. “Go now and leave your life of sin.”

**Yeah, been paralyzed in fear, anger, unforgiveness, and hate.

Getting into a boat, Jesus crossed over the sea and came toHis own city.
2  And they brought to Him a paralytic lying on a bed. Seeing their faith, Jesus said to the paralytic, “ Take courage, son;your sins are forgiven.” 3 And some of the scribes said to themselves, “This fellow blasphemes.” 4 And Jesus knowing their thoughts said, “Why are you thinking evil in your hearts?5 Which is easier, to say, ‘ Your sins are forgiven,’ or to say, ‘Get up, and walk’? 6 But so that you may know that the Son of Man has authority on earth to forgive sins”—then He *said to the paralytic, “Get up, pick up your bed and go home.”

7 And he got up and went home. 8 But when the crowds saw this, they were awestruck, and glorified God, who had given such authority to men.

**Been freed from that bondage too 🙂


18 While He was saying these things to them, a synagogue official game and bowed down before Him, and said, “My daughter has just died; but come and lay Your hand on her, and she will.”  19 Jesus got up and began to follow him, and so did His disciples.

**Oh, now this a good one.  While I have not had this particular disease, I have had physical ailments that I carry daily, and while I have not received the miraculous healing physically on this side of glory, I have been the emotional healing and been given the grace to live my life freely in His power.  That power is available to you as well . . . . just reach out, and touch . . . . the very hem of his garment.  Oh my!  Can you feel the power?!

20 And a woman who had been suffering from a hemorrhage for twelve years, came up from behind Him and touched the fringe of His cloak; 21 for she was saying to herself, “if I only touch His garment, I will get well.”  22 But Jesus turning and seeing her said, “Daughter, take courage; your faith has made you well.”  At once the woman was made well.

23  When Jesus came into the official’s house, and saw the flute-players and crowd in noisy disorder, He said, 24″Leave; for this girl has not died, but is asleep.” and they began laughing at Him. 25 but when the crowd had been sent out, He entered and took her by the hand, and the girl got up. 26 The news spread throughout the land.

I have not been brought back from a physical death.  My story is better than that.  I have been brought to life from this same man named Jesus.  He DEFEATED death, so that I may live!  Hallelujah!
7 As Jesus went on from there, two blind men followed Him, crying out, “Have mercy on us, Son of David!” 28 When He entered the house, the blind men came up to Him, and Jesus *said to them, “Do you believe that I am able to do this?”They *said to Him, “Yes, Lord.” 29 Then He touched their eyes, saying, “It shall be done to you according to your faith.”30 And their eyes were opened.

**When I became a Christian at the age of 28, I had evil eyes.  I saw as the world saw.  I began praying Matthew 6:22-23 over my eyes,“The eye is the lamp of the body; so then if your eye is[k]clear, your whole body will be full of light. 23 But if your eye is [l]bad, your whole body will be full of darkness. If then the light that is in you is darkness, how great is the darkness!”
**Jesus, by his miraculous healing power, gave me pure eyes.
And Jesus sternly warned them: “See that no one knows about this!” 31 But they went out and spread the news about Him throughout all that land.
32 As they were going out, a mute, demon-possessed man was brought to Him. 33 After the demon was cast out, the mute man spoke; and the crowds were amazed, and weresaying, “ Nothing like this has ever been seen in Israel.”34 But the Pharisees were saying, “He casts out the demons by the ruler of the demons.”

**Whoa.  This one is deep.  Have you ever fought demons?  If you are a born again believer, satan is coming to “kill, steal, and to destroy you! (John 10:10).  The flip side of that is that Jesus, He has come to give you life, and to give it more abundantly!  (John 10:10)
The more you are doing for Jesus, the harder satan is going to come at you.**
**You too, can be freed from demons.  At one time, my demons were drugs, alcohol, cigarettes, and too many adulterous affairs to count.  But Jesus, He freed me from those demons.**
He can and will do the same for you!
35 Jesus was going through all the cities and villages, teaching in their synagogues and proclaiming the gospel of the kingdom, and healing every kind of disease and every kind of sickness.
I know this is a long post, and I apologize, but I have been working on this since yesterday morning.
I was distraught, discouraged, and full of doubts.
One song kept coming to my mind, so I came in and googled it.
Amazing Love/You Are My King
Don’t just listen to this song, watch the video.  Please.
As tears rolled and continue to roll down my face, weeping and whaling began.  As I not only sang these words over and over, I prayed them. I remembered being paralyzed in fear, I remembered being the adulterous woman, I remembered thinking, “Oh God, if I could just TOUCH the hem of your garment, I remembered the demons, I remembered the day I no longer saw things as the world saw them . . . . I remembered the grace and mercy that was given to me so freely!
Distraught(ness).  Gone.
Discouragement.  Gone.
Doubt.  Gone.
Freedom came as I raised both hands, praising My King.
As I type these words, reflecting on the moment, I am covered in goosebumps and tears.
I have no clue who this is for, other than for me and having to share the power and love of My King Jesus.
That same love He has for me, the same miracles He has performed for me, and countless others I know and hear about, He will do for you.

One thought on “Jesus, You Are My King”